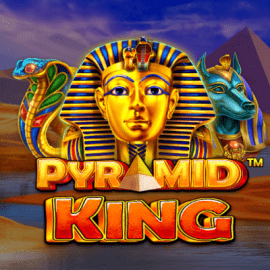 Pyramid King, find Anubis and walk away with some gold in this civilisations slot!
Play Now
by Pragmatic Play
Home » Video Slots

Hit the money symbols to win the rich Respin Round with up to 1000x bet jackpots. In the free spins get random special expanding symbols to top up your awards.

The game developed by Pragmatic Play has a similar profile to hits like Wolf Gold and John Hunter and the Tomb of the Scarab Queen, using a combination of on-screen jackpots and money symbols, along with a volatile and a non-volatile feature. The Money Respin round is a less volatile feature, bringing constant wins that in the long run provide enough balance to play for a higher volatility feature, the Free Spins with a special expanding symbol.

The features are rewarding and easy to understand which makes Pyramid King a game for both pure gamblers and fun players. The game is meant to attract players on casino sites but also alternatives like Bingo or sportsbooks.

When six or more symbol MO appear, the player is awarded the respin bonus. All winning combinations are paid, then the symbols fade except for symbol MO.

The reels are spun three times. Any additional symbol MO are sticky. If the player gets another symbol MO, then the spins are reset to 3. Play continues until all spins are exhausted, or all positions are filled with symbol MO. Player is awarded sum of prizes.

At the start of the feature, a symbol is chosen at random (SCATTER cannot be chosen). If the chosen symbol lands, the entire reel will expand to become that symbol.

During the feature the chosen symbol will not pay left to right. It pays any on the line.

The game will pay regular lines first, then chosen symbols will expand and pay on their own with no SCATTER substitute. During regular line pay, the chosen symbol does not win line wins. 3 SCATTERS during Free games add an extra 10 games. Re-spin Feature is enabled during Free Games Feature.

18+. Richprize.com is owned by Fresharverst N.V., a limited liability company incorporated under the laws of Curacao. A Curacao based company, which is a fully licensed operator.

18+. YoYoCasino.com is owned and operated by Araxio Development N.V., a company incorporated under the laws of Curacao.

Eye Of The Amulet
Play Now

Eye Of The Amulet
Play Now