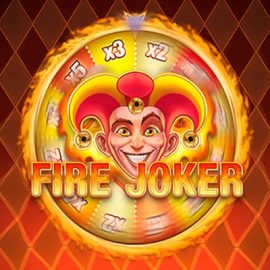 This online slot is a conventional fruit machine, which brings a bit of mischief
Play Now
by Play'n GO
Home » Scatter Symbol

An attractive machine that has a fiery side, this mobile slot is an impressive 3×3 reel, 5 preset payline game for stimulating emotions. Fire Joker is a mobile slot machine from the renowned manufacturer Play’nGo. The key feature is its multiplier wheel which will make you cool your heels waiting for your win. Try your luck with Fire Joker.

With Fire Joker, Play’nGo has created a classic 3-reel entertainment game. Although this game is like a classic fruit machine, it also takes into account modern trends that led to the creation of a “hybrid” slot, in which traditional sets and symbols are combined with new additional bonuses. The set jackpot in the central game brings 80 coins, yet owing to the bonus, your stake can be bigger by 800 times.

This average variance slot offers its players an RTP indicator at the level of 96.15%. Standard slots tend to stick to uncomplicated features, so the Fire Joker slot is unquestionably a mouthful of fresh air. 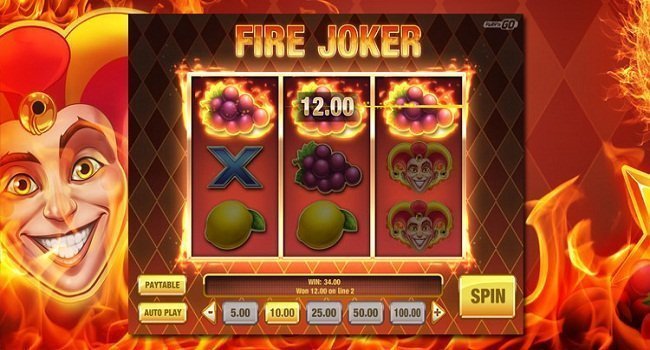 This online slot is a conventional fruit machine, which brings a bit of mischief. The Joker gives a comic effect to this game, although the winnings it brings are not funny at all. Its reels are mounted on a gold frame on a background decorated in the traditional style of the Joker, and it gives hope for unexpected success.

While playing, after each spin you aim to beat out a sequence of images on the reels, glaring at the screen each time the reel pauses. Enjoy your Fire Joker game and observe your balance grow during bigger spins. Every hot combination will ignite, after which with every burning symbol the game will be hotter.

This slot machine looks much more modern compared to most alike games. The graphics and design of the machine are stylish and quite simple. A dance soundtrack helps create such a modern atmosphere. Most slot games don’t have any musical accompaniment at all, but the usual sound effects, to our mind, are a great addition.

Slots are classical for this genre, but they are complemented by the persistent wild image of Joker. It appears regularly, coming instead of all additional icons to form pleasant winning combinations. Additional standard symbols comprise the bullion, big X, red seven, cherry, gold star, grape, plum, and lemon.

There aren’t many unusual features from a typical game, but the Fire Joker slot offers somewhat in this area. It has more unusual bonuses compared to many other slots, you may see them while playing. If the picture is seen on a whole reel, you receive extra free re-spins during the next 2 reels.

All symbols, starting from the cheapest fruit character to the crazy Joker, may come into sight, join on the reel, and then close it completely. This boosts your odds of winning.

Provided you only get 2 full reels with the icons, the game begins to trigger a re-spin on a reel in which the success combination did not fall out, thus presenting the gamer another chance to knock out 3 full reels and then launch the “multiplier Wheel” function.

If you see successive three reels with fully connected characters, you turn on “Multiplier Wheel” – the amusing bonus feature. Afterward, the wheel will spin, and on the display, the player will see a multiplier applied to his winner combinations. Its range begins from 2x to 10x, meaning you can enlarge your wager by 800 times, depending on which characters you obtain.

Playing this fascinating game is easy. To place your wager press the +/- buttons underneath the gaming bar. You may select numbers amid 0.05 – 100. The big and golden Spin button is designed for commencing spinning, the auto play button is used to mechanically spin the reels.

The Fire Joker unfolds on 3 rows, 3 reels, including 5 ways to succeed, and gamers can gamble up to £100 per spin on any device or platform. It contains a high average RTP – 96.15%, and average variance that inclines more towards the upper end of the average than its lower end. The feral picture of the Joker is a standard symbol and serves as the top rewarded character.

The Flaming re-spins’ make you lose spins, yet only in case on the same spin, you come across 2 stacked symbols. The major attraction is the so-called Multiplier Wheel, though you should fill the reels with some appropriate symbols to activate it. Don’t expect this to take place very often, yet when it does, you may make use of raising the multiplier to 10x.

This mobile game will lead you to victory only when you put 3 corresponding characters on the payline. The Joker image is currently the most significant, besides, you will come across typical slot game characters, counting stars, a variety of fruits, and a BAR image. Let’s see the paytable for the Fire Joker slot:

Plums- gives 7 coins for 3 on a payline;

Users note that Fire Joker is an attractive and modern game, a definite futuristic design. The players highlight the game’s simplicity and convenience because gamers are not distracted by special features, which may not always be rewarding. The game offers some great rewards due to the massive x 10 multiplier, and this is valuable for gamers. Some note the sound may need some changes, but overall users find this game simple but entertaining.

Fire Joker has some unusual bonus features that you wouldn’t normally find in its primary version. This sets it apart from others, and maybe that is why it has been so successful among gamers. It is tricky to estimate the game’s size of the target audience since it can attract both gamers who like conventional slots and people who like new games with added features.

However, we say with confidence that the game ignites passions and combines the easiness principles. Fire Joker’s high RTP rate, re-spins, and large wins with the smallest bets are other advantages. You can play from any smart device; the game is definitely worth playing.

Where to play Fire Joker Slot

18+. Karamba.com is a brand owned by ASG Technologies Ltd, a company incorporated under the laws of British Virgin Islands. The games on this website are powered and operated by Aspire Global International LTD., a Malta based company, which is a fully licensed operator.

18+. Malina.com is a brand owned by Araxio Development N.V., a company incorporated under the laws of Curacao with company registration number 141409

18+. Mrplay.com is a brand owned by Marketplay LTD, a company incorporated under the laws of Malta. The games on this website are powered and operated by Aspire Global International LTD., a Malta based company, which is a fully licensed operator.

18+. Kaiserslots is a brand owned by Tau Marketing Services Ltd, a company incorporated under the laws of United Kingdom. The games on this website are powered and operated by Aspire Global International LTD., a Malta based company, which is a fully licensed operator.