Round up energetic extraterrestrials in the Reactoonz slot from Play'nGO!
Play Now
by Play'n GO
Home » Video Slots

An unconventional alien-themed online slot by Play’n Go with a 7×7 grid, 5 bonus rounds and a maximum x4570 jackpot.

Have you ever played a slot with a 7×7 grid? In addition to its unconventional size, it features a cascading game engine, which allows you to win several times consecutively on every spin.

Released by the famous Play’n Go developer, this cheerful videoslot is aimed at seasoned gamblers. Even though its jackpot is not progressive, you might win up to x4570 your stake on a single spin, if fortune favors you. Launch this game on your computer or mobile device to enjoy the utmost adrenaline rush! 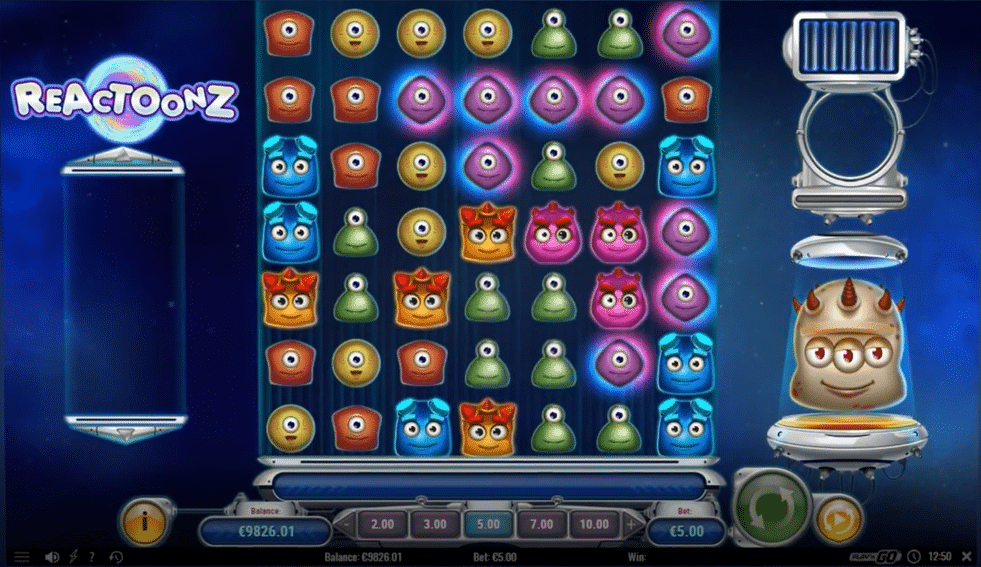 First, let’s find out who these mysterious Reactoonz are. They are funny extraterrestrials, created as 3D cartoon characters. 4 of them are lower-paying, the other 4 are higher-paying and the wild symbol is the vortex. The most generous alien is the pink one: when four of them land on the reels simultaneously, you’ll receive x750 your bet. The sum of the bet might vary from 0.2 to 100 coins, which is a rather impressive range. To compile a winning combination, you need to place five identical aliens in a vertical or horizontal line. They will burst and new symbols will keep on cascading to the grid until there are no more winning combinations.

The more you win, the further you advance in the Quantum Leap bonus games. There are three so-called “charge meters” that you should complete to reach the most lucrative Guargantoon feature. It will send a 3×3 wild symbol to a random position on the grid. New symbols will keep on cascading until no more winning combinations can be compiled. After that, the wild symbol will shrink to a 2×2 size. The cycle will repeat once again and then the wild symbol will shrink to a 1×1 size. If a spin is not bringing you any wins, the Guargantoon might send up to 8 additional symbols to the grid. When four regular symbols form a square shape on the grid, it becomes known as Giantoonz: this figure doubles the prize of any winning combination it becomes part of.

When reading this description, you might get the impression that the game is outstandingly generous and it would make you a millionaire in one week. Alas, this is just an illusion. It’s true that thanks to the Quantum Leap and the Guargantoon the lucky ones win hundreds or even thousands in one go — but there is a flipside to this money shower as well.

Given that Reactoonz is a high-volatility machine, you might need to spend quite a lot of time and funds to reach the coveted bonus levels. If you are planning to spend $100 or less, it makes no sense to start spinning the reels. However, the RTP of the game is 95.7% — so if you are lucky, your prize will be handsome. When playing with high stakes, you should avoid enabling the Autoplay function, even though this slot is equipped with it. When you want to relax, you’d better switch to another game instead of allowing the persistent algorithm of the Reactoonz to spend all your cash on auto-spins.

In addition to the above-mentioned, there are plenty of other details that make the gameplay more exciting and sophisticated. But the aim of this review is not to provide you with an extensive set of Reactoonz rules — you’ll be able to explore them when playing this amazing game. Launch it when you are in your best gambling shape!

Where to play Reactoonz Slot game?

18+. Lightcasino.com is a brand owned by ROMIX LIMITED, a company incorporated under the laws of Malta.