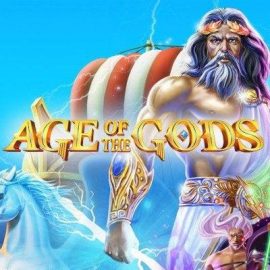 Age of the Gods Slot

Age of the Gods is not just a slot but a series of highly successful games by the renowned Playtech provider. Gamblers can’t get enough of this genius winning formula: take Ancient Greece gods, add a progressive jackpot, spice it up with stunning visuals and stir carefully, trying not to spill!

The five reels of the initial slot of this series are located as if in a temple with snow-white pillars shining bright against the serene blue sky. As you might guess, the temple holds fabulous treasures.

This slot has 20 paylines, 3 rows and accepts stakes from 20p to 250p per spin. The biggest multiplier you potentially can get is x50,000 your stake: this will happen if you reach the x10,000 multiplier during a free spin session and then the x5 one in the Athena Free Game. Each of the bonus games named after its own god has its specific rules which might be slightly confusing for newbies. For this reason, the Age of the Gods should be considered as a perfect slot for seasoned gamblers in search of fresh impressions. 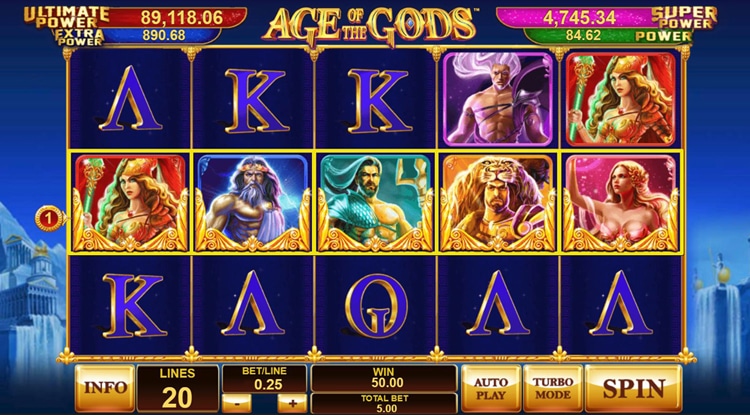 Apart from Athena, the other free spin sessions are triggered by Hercules, Poseidon and Zeus. You can expect to collect up to 5 wild symbols on each free spin and see multipliers increase to up to x5. Free spins can be retriggered again and again until you come across Hades. When all the gods land on the reels simultaneously, their Pantheon will open you access to a prize that equals 10 times your stake. In addition to the four above-mentioned gods, the Pantheon also includes Aphrodite.

Access to jackpot games can be given randomly, at any moment, so the anticipation of it will keep you in constant pleasant tension. In these games, you can gradually trigger 4 jackpots. If you won’t be able to obtain any of them, don’t worry: their pools will be partly distributed between other games within the slot.

To make quicker spins, feel free to switch to the Turbo Mode. Those who are a bit too lazy to spin the reels manually can activate the Auto Play option: the reels will be set in motion automatically from 10 to 99 times (this is not a random number, you can consciously select it)..

You can launch this game either on your stationary computer or any mobile device, be it a laptop, a smartphone or a tablet, regardless of its brand and operating system. Its RTP is 95.02%, which is a rather generous ratio among the progressive slots. 0.99% of this indicator counts for the contribution of the progressive jackpot. This means the casino leaves only 4.98% as its commission and distributes the remaining funds among gamblers. The volatility of the Age of Gods is medium, which is a reasonable choice. The game won’t be spoiling you with winnings too frequently but once you win, the prize will be quite handsome.

If you want to call yourself a gambling expert, you should without fail play the Age of the Gods by Playtech. You can select any installment of this remarkable series, being sure that it will deliver you an immense load of adrenaline. These games set a benchmark for all the other progressive slots and have made quite a few people rich and happy since their release dates. In August 2019, a lucky gambler managed to win as much as £800,000 in the initial installment of the Age of Gods.

Age of the Gods Slot

Where to play Age of the Gods Slot

18+. euslot.com is owned and operated by N1 Interactive Ltd, a company incorporated under the laws of Malta. Euslot.com is licensed and regulated by the Malta Gaming Authority.

18+. AlfCasino.com website is owned and operated by Araxio Development N.V., a company incorporated under the laws of Curaçao. The games on this website are powered and operated by Antillephone N.V., which is a fully licensed operator.