The long-awaited sequel to the most popular Booongo slot is finally here!
Play Now
by Booongo Gaming
Home » Scatter Symbol

An exemplary Chinese-themed online slot by Booongo. Free spins, generous multipliers and a chance to win x5000 your stake

15 Dragon Pearls was built as a sequel to the most popular slot of its developer, Booongo. Equipped with a 5×3 grid, it counts 25 paylines and immerses you in the atmosphere of refined Chinese culture. If compared to its predecessor, the slot offers a new sophisticated bonus game and allows you to win a bigger prize, up to x5000 your stake. However, the RTP and the volatility of this videoslot remain undisclosed which is typical of Booongo. Would you dare to trust this dark horse?

Let’s get this straight: Booongo is a credible and legitimate brand. It entered the market in 2015 which is not too long ago but is consistently building a solid reputation for itself. Gamblers are struggling to guess the volatility of 15 Dragon Pearls: so far, judging by people’s reviews, it should be medium. The RTP should be around 95% which is the industry’s average. 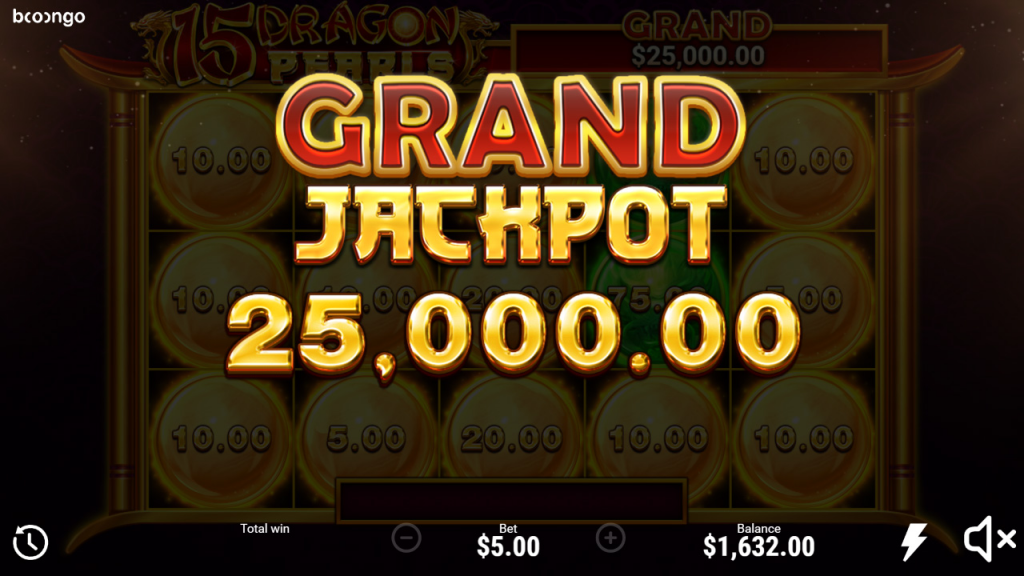 But at least we know the coin size for sure: it can be modified within the range from 0,25 to 40. That’s an indisputable merit of the game. For cautious players, it’s important to be able to control their spendings. Highrollers will be able to gradually build the tension, dreaming of hitting the jackpot. By the way, you can launch this game both on your stationary computer or any portable gadget, which is handy.

The symbols on the reels are related to the Chinese notion of wealth: a money tree, a golden frog, coins and the golden dragon’s face. With the help of this dragon, you can earn up to x20 your stake. Minor symbols were, as usual, borrowed from a cards deck: J, Q, K, A.

The wild symbol is the yin-yang and the scatter one is the pot with coins. If three pots land simultaneously anywhere on the reels, you’ll be invited to 8 free spins. During a free spins session, only high-value symbols will land on the reels. What’s more, this act of generosity can be prolonged with further 8 spins if you once again gather three pots.

To enter the bonus game that differentiates the sequel from the original, you should gather a minimum of 6 orange pearls. This will give you access to a respins session where orange, green and blue pearls will serve as multipliers. To hit the x1000 jackpot, you should gather all the 15 pearls on the reels. The sum of the prize might vary depending on the words written on the pearls: the term “Mini” activates a minor coefficient, while pearls labeled as “Major” will grant you a handsome sum. The maximum prize you can reach outside of the bonus game is x250, which might be nice as well if you are playing with high stakes.

Even though Booongo distributes its games on a global scale, Asia is their primary market. This developer has vast experience in dealing with dragons, tigers, emperors’ fortunes and other attributes of the refined Oriental aesthetics. From the visual viewpoint, the slot looks splendid, shining with gold and red. Its meditative soundtrack is a piece of art that helps you to relax and concentrate.

Newbies and seasoned gamblers alike should enjoy this beautiful and not too complicated game. It is not innovative at all but can serve as a worthy example of its genre. Western customers might call Booongo developers too conservative — yet commercial indicators prove that this approach enjoys stable demand and thus should be continued.

18+. Gunsbet.com is owned and operated by Dama N.V., a company registered and established under the laws of Curacao.

18+. Duxcasino is operated by N1 Interactive Ltd, a company incorporated under the laws of Malta.