This high volatility online slot by Play’n Go offers generous free spin sessions and allows you to win up to x5000 your stake!

Do you believe in magic? Probably not, until you witness it. The Rise of Merlin slot by the renowned Play’n Go developer might keep you in anticipation for quite a few days or even weeks before showering you with cash. Even though this game doesn’t offer a progressive jackpot, it might let you win up to x5000 your stake — which is not too bad given that you can place up to 5 coins on each of its 10 paylines. Read this review till the end to get to know how to use miracles to your advantage.

Even though the wizard in discussion is that very Merlin who mentored King Arthur, the visuals of the game have nothing in common with the heroic epos of knighthood. You find yourself in a beautiful and romantic tower where blueish glowing particles are soaring in the air. Such a peaceful background allows you to fully concentrate on the grid that consists of 5 reels, each of which contains 3 symbols.

The most coveted symbol is Merlin. If five of his portraits land on the payline, they will increase your stake by x5000, if four — by x1000. The orb, by the way, has the same value but we’ll talk about this one later. The second biggest prize counts x1600: to get it, collect five red dragons on the payline. Four red dragons will bring you just x300 your stake. Four white dragons or owls will increase your stake by x600. All the other prizes are x120 or less. Apart from the symbols that we have already mentioned, the others were taken from a card deck: 10, J, Q, K, A. 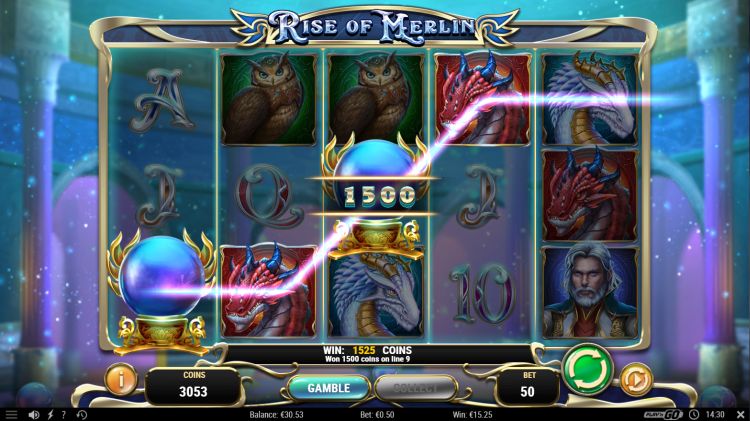 The orb doubles both as the wild and the scatter. If you gather at least three orbs on the reels regardless of their exact positions, this will trigger a session of 8 free spins. Such sessions can be retriggered an infinite number of times, but the number of spins will always remain the same. During each free spins session, a random symbol will be chosen as expanded. Once you reach a new session, you’ll get a new expanded symbol in addition to the already existing one. Outstandingly lucky players can get to the point when all the symbols become expanded and they will collect impressive payouts, starting with the lowest paying symbol.

In the very first passage, we already said that Rise of Merlin by default has 10 paylines. But if you wish, you can decrease this number down to 1. The coin size might vary from 0.01 to 2 and the number of coins per line — from 1 to 5. Given that the RTP of the game is 96% and its volatility is very high, it might be wise to start the small numbers first. This will allow you to get familiar with the mechanics of the slot without risking too much. When you feel more confident, feel free to raise the stakes and enable Auto and Turbo modes. The former will allow you to keep spinning the reels without manually pushing the button each time. The latter will make the reels spin faster.

Customers’ reviews about the Rise of Merlin are generally very positive. People admit that “dry” periods might last for weeks yet the gameplay is highly enjoyable and once you hit a big win you feel genuinely gratified. So welcome to the magic world of Merlin, and let your gambling adventure be fruitful!

Where to play Rise of Merlyn Slot game?

18+. Zulabet.com is owned by ROMIX LIMITED Jurisdiction Malta, ROMIX LIMITED is licensed and regulated by the Malta Gaming Authority (MGA).