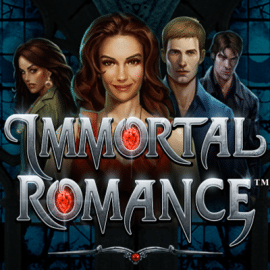 Experience of disconnecting from routine and immersing in the fabulous world of mystery and chance.
Play Now
by Microgaming
Home » Video Slots

This vampire-themed, high-volatility online slot by Microgaming will treat you with 243 paylines and a slew of diverse bonus games

Probably, Immortal Love would be one of the top choices for jaded gamblers whose main priorities are not winnings and numbers, but the overall experience of disconnecting from routine and immersing in the fabulous world of mystery and chance.

The name of the Immortal Romance slot by Microgaming rings a bell with thousands of gamblers. It’s based on the deadly alluring theme of vampires and features a stunning gothic design. The “O” letters shine red like two drops of blood, and the intricate metal forging on the reels’ frame as if transfers you to an enchanted Transylvania castle. Released in HTML5 format in 2017, this 5-reel, 243-payline videoslot remains one of the indisputable gems in the vast collection of Microgaming.

With its 96.86% RTP and high volatility, this game will pay you generously — but only in case you are patient enough to wait for a big win. It won’t be showering you with prizes too often. As its theme suggests, Immortal Romance will create an immense emotional tension to make you experience nearly the same storm of passions as if you fell in love. Its jackpot is not a progressive one, which means it doesn’t increase from one round to another. If you are dreaming of a big win that will change your life once and forever, you might consider placing stakes at some different slots. Immortal Romance would be more suitable for aesthetes and those who regard gambling as a spiritual ritual.

The logo of the game is considered to be the wild symbol. Once it lands on the reels, it will substitute any other symbol and double your prize. The only item it can’t substitute is the golden lion which is the scatter symbol. If you manage to gather three lions on the reels simultaneously, they will allow you to explore fascinating storylines. You can enter the bonus game a maximum of 5 times to discover new features and characters.

The names of the gorgeous brunettes whose portraits are depicted on the reels are Sarah and Amber, and the gentlemen’s names are Troy and Michael. Each of them will invite you to free spins plus a unique special bonus feature. The bonus features that each of these characters offers differ in the number of free spins and retriggers as well as the coefficients of multipliers. You’ll be very lucky if during the bonus game triggered by Sarah you’ll discover a Wild Wyne symbol on the third reel — in this case, other symbols will be randomly transformed into additional substitutes.

Without spoiling too much, it would be necessary to say that the plot of this game is based on intricate love stories between mortal people and vampires. The people aren’t ready to admit yet that they can’t suppress their feelings — and have no idea that their beloved ones slightly differ from regular humans. Some of the blood-sucking creatures are quite friendly towards common people, as long as their predator nature permits. Others are more concentrated on their egoistic goals of power, control and financial well-being. You’ll definitely enjoy this plot if you spend hours watching vampire sagas on TV and reading gothic novels. It’s a beautiful and captivating slot that Microgaming designers and engineers put a lot of inspiration into.

For newbies, this game might seem a bit too complicated. To make the best of the diverse bonus games, you need to memorize their rules and act quickly, which requires a lot of attention and outstanding concentration capabilities. Probably, Immortal Love would be one of the top choices for jaded gamblers whose main priorities are not winnings and numbers, but the overall experience of disconnecting from routine and immersing in the fabulous world of mystery and chance.

18+. Karamba.com is a brand owned by ASG Technologies Ltd, a company incorporated under the laws of British Virgin Islands. The games on this website are powered and operated by Aspire Global International LTD., a Malta based company, which is a fully licensed operator.

18+. Malina.com is a brand owned by Araxio Development N.V., a company incorporated under the laws of Curacao with company registration number 141409

18+. Mrplay.com is a brand owned by Marketplay LTD, a company incorporated under the laws of Malta. The games on this website are powered and operated by Aspire Global International LTD., a Malta based company, which is a fully licensed operator.

18+. Spins Royale Casino is powered by Nextan (Gibraltar) Limited a company registred in Gibraltar. Nextan is licensed and regulated by Gibraltar Gambling Comission (RGL no.054).