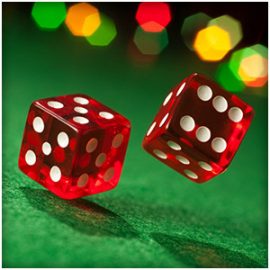 How to Play Craps?

In brick-and-mortar casinos, Craps tables are normally the busiest and the loudest ones. This is a highly emotional game that involves a lot of cheering and clamoring. In online gambling institutions, the atmosphere is predictably different, but you can still enjoy the utmost drive and immense satisfaction if you win a handsome sum. The rules are relatively uncomplicated, which attracts to Craps the vastest audience possible. However, the casino version of this game is more sophisticated than the one that you might have played with your peers in childhood.

How to Play Craps?

The Player throws a pair of dice. Each face of each dice contains a number within the range of one to six. When both dice land on the table, the sum of the number on their upper faces will fall within the range from two to twelve. These two outcomes are the least likely because each of them can be achieved only by one numeric combination. On the contrary, eight is quite a frequent total since it is made up of six plus two, five plus three, four plus four.

As you see, even though the outcome in Craps depends purely on luck, the theory of probability applies to this game. During the play, gamblers compile tables with the results. When they notice that a certain result (for instance, three points) has been missing for a long time, they place their bets on it.

Bets can be placed either on the table or against the table. Those on the table suggest correctly guessing the numbers that the dice display. Those against the table suggest that dice should display a losing combination. There are three possible losing combinations that the Player might hit on the first roll: twelve, three, or two points — that is, the least likely ones. They finish the game for this particular Player. Eleven and seven, by contrast, are the luckiest numbers that bring immediate victory.

According to the peculiar terminology of Craps, the situation when the total of the numbers on both dice equals ten, nine, eight, six, five or four is called Point. After that, the game goes on. At its different stages, the meaning of numbers might vary. For instance, seven is not considered as the winning number anymore after the Point.

This game is available in the following varieties:

Sometimes you can play Craps with dice and cards or entirely replace the dice with cards. Each of these variations has its own regulations regarding how the game goes on in its further stages.

Playing Craps in a brick-and-mortar venue is surrounded with numerous rituals. Just to name a few, customers are allowed to throw the dice only with the same hand that they used to pick them. The dealer who distributes the dice is called “stickman” because he is not allowed to touch the dice with his fingers and is using a stick instead. The crowd starts to cheer each time the Player rolls. In online, these rituals are not that pronounced and not that meaningful. So the game proceeds quickly and leaves you hardly any time to think.

More and more platforms offer Craps in live casino format. This type of entertainment suggests live broadcasting from the gaming tables. Gamblers might be placing bets from their homes, offices, or elsewhere, enjoying a highly realistic illusion of presence in an offline club. Young beautiful dealers are smiling and sharing their perfect mood with the clients. Certain clubs offer only the browser version of Craps but the mobile format is steadily gaining popularity as well.

Some sites allow customers to try their luck at Craps in free trial mode first, without creating an account in the system. For this, they should launch the game before they register and top up the deposit. This allows them to figure out how the game works and to build their individual profitable strategies. When they gather enough experience and become confident enough, they can switch on to the paid mode at any moment. After that, they will be allowed to withdraw winnings to their bank cards or e-wallet and thus enjoy much greater adrenaline.